Excellent singing at all four Autumn Internationals (against New Zealand, Argentina, Georgia and Australia) at the Principality Stadium – four choirs at each game with numbers ranging from 155 – 195 singers plus The Regimental Band of The Royal Welsh, under its new Musical Director Richard Burton.

Having been Musical Director of Côr Meibion De Cymru (The South Wales Male Choir) from 2000 – 2006, it is privilege to have been invited to succeed the late Wyn Calvin MBE as choir President.  Formed in 1982, the choir has had just three Presidents in its 40 year history – the  founding President, Viscount Tonypandy, followed by Lord Gordon Parry and then Wyn Calvin. All three past Presidents will be  hard acts to follow in so many ways.

Delighted to be invited to The Wessex Male Choir’s annual concert in July, and to accept their invitation to become an Honorary Patron of the choir, alongside Aled Jones, Howard Goodall and Rhiannon Williams. I have worked with the choir on a number of occasions, including singing at Wembley Stadium ahead of an American NFL game in front of more than 85,000 spectators.

For the three Women’s Six Nations Internationals at Cardiff Arms Park, we welcome back Côr Y Gleision, CF1 and Tadau Trisant, and are delighted to have two choirs making their first appearance – The Richard Williams Singers and the Affinity Female Voice Choir. Choirs at all three games will have accompaniment provided by the Lewis Merthyr Band under the direction of Alan Bourne (for Wales v Scotland) and Craig Roberts (for Wales v France and Wales v Italy.).

Pleased to report that the recording of Hen Wlad with the Cory Band and four choirs which was used at the November 2020 games is also being played ahead of all of Wales’ 2021 Six Nations games, home and away, as well as at the 2021 Autumn Internationals against New Zealand, South Africa, Fiji and Australia.

It was great fun working on Zoom in the Virtual Concert organised by Boston Saengerfest Men’s Chorus, and featuring the Vancouver and Burlington Welsh Male Choirs from Canada, along with Pendyrus and Brecon Male Choirs from Wales.

Thoroughly enjoyed two Zoom sessions with the Brecon Male Voice Choir, one of which was a Q&A session, the other talking through six tracks from recordings they had requested.

With all 2020 Autumn rugby games being played behind closed doors, a recording we made of the Welsh National Anthem (with The Cory Band, Cardiff Arms Park MVC, Côr Meibion Taf, Pendyrus and Pontarddulais Male Choirs) is being played at all games, home and away.

Thrilled to take a virtual rehearsal with the Boston Saengerfest Male Chorus via Zoom. During this lockdown period when all normal choir activities are on hold, It was good to see so many singers and good friends as we went through six pieces of music, followed by a lively Q&A session. Great fun.

Also delighted to take a virtual Q&A session with members of three choirs – Barry MVC, Wessex MVC and South Notts Men’s Chorus. An interesting hour with some probing questions about repertoire, attributes of a good MD……, the current and future position with choirs, does choir size matter, etc. A really stimulating hour.

Delighted to appear on Roy Noble’s radio show in January, to talk about the forthcoming Six Nations. Always a lot of fun. This was followed by a similar conversation on BBC Radio Surrey.

Started the musical year by rehearsing the renowned Treorchy Male Choir in preparation for their appearance at Wales v France in February.

Delighted to end the year with Eschoir, singing at a private reception in Buckingham Palace, entertaining guests with Christmas Carols.

Also in November, pleased to be working again with The Borough Welsh Choir and Meibion Goronwy, both of whom have appeared at games in The Principality Stadium.

The two summer games (against England and Ireland) ahead of the Rugby World Cup provided some superb singing from the three mixed voice choirs and four male choirs respectively. Delighted to welcome the BBC Welsh Chorus and Côr Meibion Talgarth, each making its first appearance at the Stadium.

Looking forward to conducting Hart MVC in Cornwall as guest MD in September.

Privileged to be at the Stadium with the Flint & Pendyrus Choir for some amazing singing from choirs and supporters, ahead of the Wales victory against England; this was followed by Wales v Ireland with Eschoir & Pontarddulais Male Choir, when Wales took the 2019 Grand Slam.

At its recent AGM, the Hart Male Voice Choir approved the appointment of Haydn as its new President, a position he was privileged to accept.

On May 22, Haydn joined The Borough Welsh Choir to share the conducting with Mike Williams at a Garden Party in Buckingham Palace.

The following day, he travelled to the USA and on June 2 conducted the Welsh National Anthem and pre-match singing at Wales v South Africa in the RFK Stadium in Washington DC.

On June 3, Haydn was guest conductor with the Burlington Welsh MVC at a concert in Washington DC, and at the end of the concert was delighted  to be made an Honorary Patron of the Choir.

Following a rehearsal at the Principality Stadium ahead of Wales v France on March 17, Haydn was privileged and honoured to be made a Vice-President of Côr Meibion Pendyrus. Musical Director Stewart Roberts presented Haydn with a framed Certificate, as well as a copy of the choir’s new CD.

Haydn conducted The Borough Welsh Choir at a House of Commons function in February, and was pleased to direct them again at the 2018 St David’s Day Service in the Commons’ Chapel, followed by providing choral entertainment at a reception in Number 10 Downing Street, hosted by The Prime Minister and The Secretary of State for Wales.

Haydn visited Boston in April 2017 to join the Boston Saengerfest Men’s Chorus in celebration of their 25th anniversary. He shared the conducting at an anniversary concert with the current Musical Director and three former Directors, and was honoured for his work with the choir since its formation.

BRITISH & IRISH LIONS – Haydn was privileged to be invited to join the British & Irish Lions at their training camps in Wales and Ireland, to work with the team and support staff on music for their tour to New Zealand.

Haydn gave a lunchtime presentation on conducting massed choirs to the Professional Businessmen’s Club (Probus) in December – this was his second appearance as a guest speaker.

He will also travel to Washington DC with Eschoir for the 2018 North American Festival of Wales.

With Borough Welsh Choir at the Houses of Parliament. 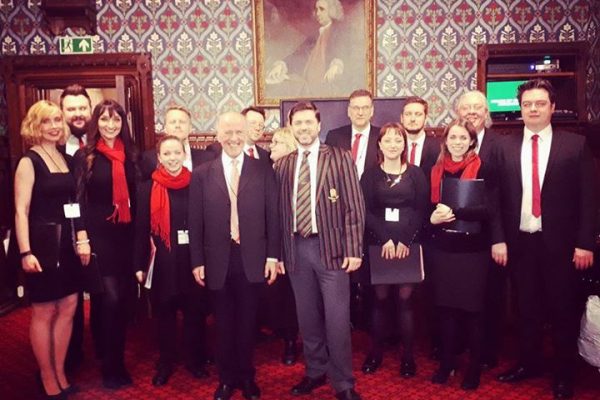 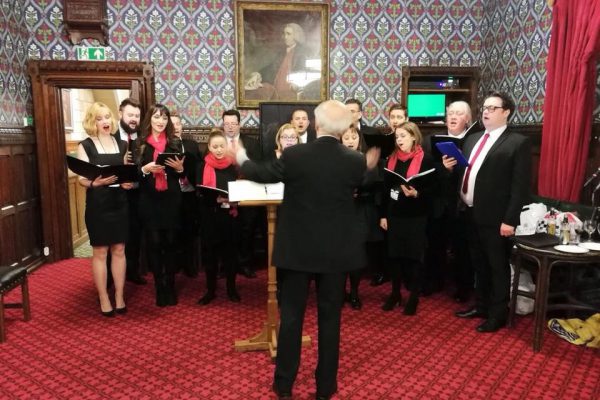 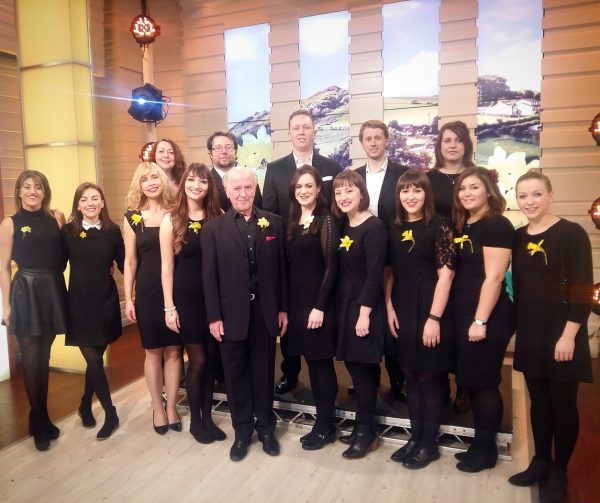 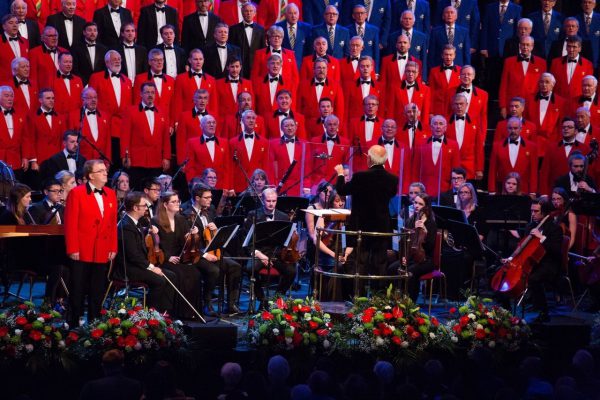 Haydn conducting the Wessex MVC and US Army Brass Ensemble at an NFL game in Wembley Stadium in front of 84,000 people 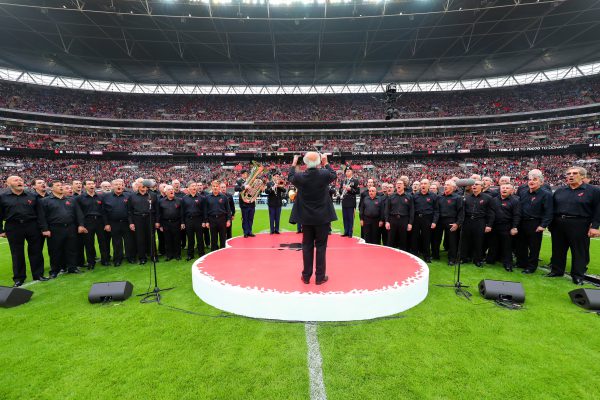 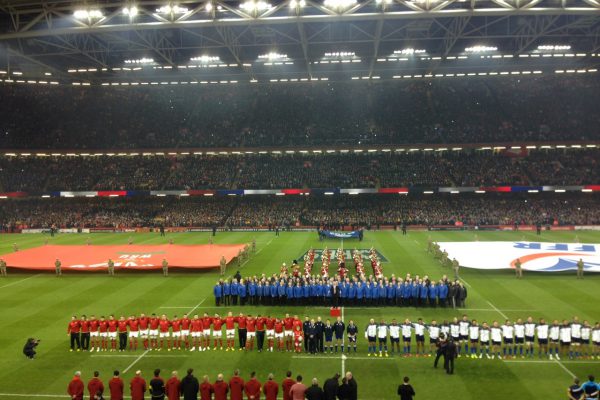 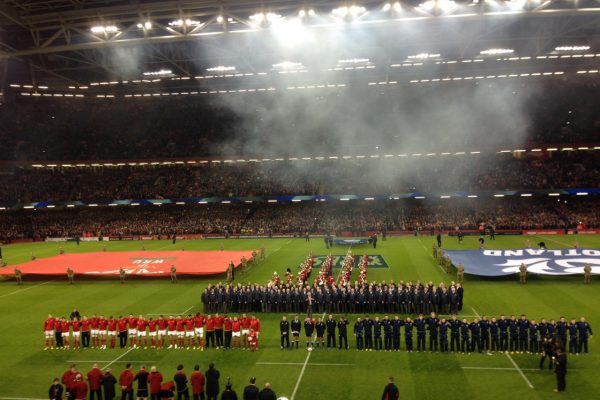 Haydn with Eschoir at a recent St David’s Day reception hosted by the Prime Minister at No.10 Downing Street. 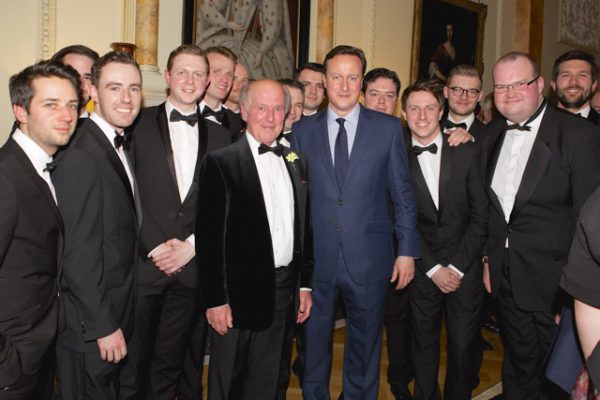 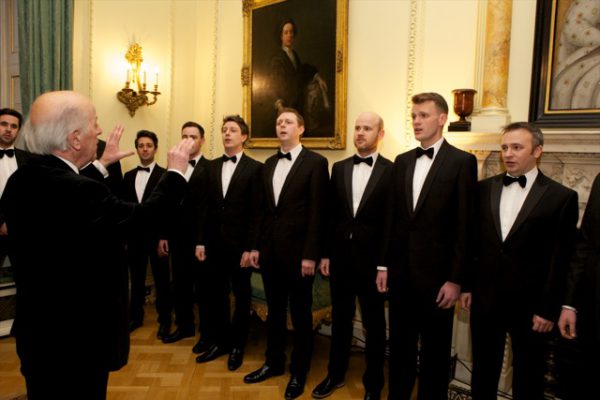 Haydn was heavily involved with the 2015 Rugby Union World Cup, conducting the Anthems at ten games in Cardiff, Wembley and Twickenham.

Haydn visited Ireland to work with the Boston Saengerfest Men’s Chorus in concerts with the Dublin Welsh and City of Cork Male Choirs. 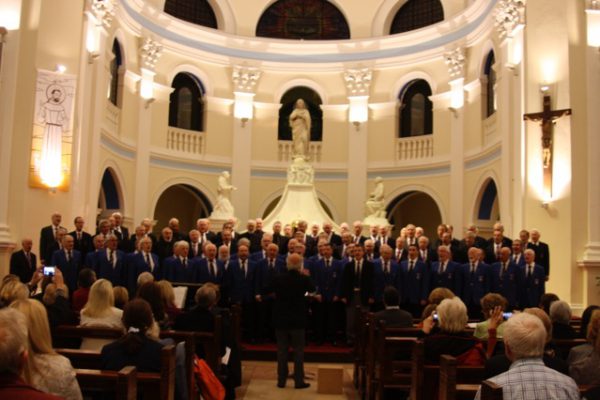 Haydn travelled to France and Belgium to conduct the Comrades Choir on a short tour, performing in Arras Cathedral and at the Menin Gate in Belgium. 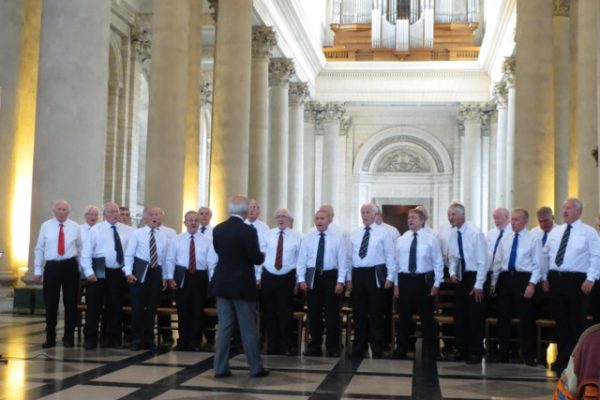 The Comrades Choir in Arras Cathedral 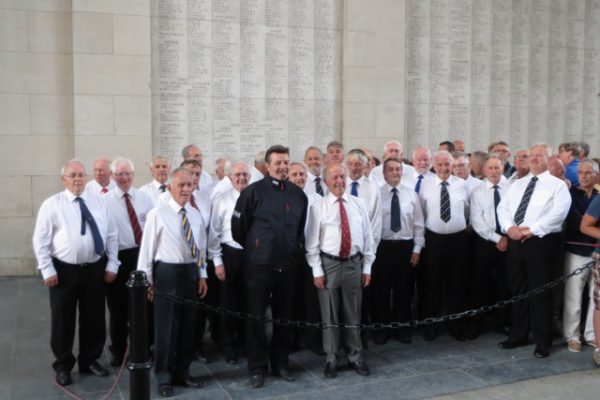 The Comrades Choir at the Menin Gate, Belgium

At the 2014 Wales v Italy game, the then WRU Chief Executive, Roger Lewis, presented Haydn with an inscribed crystal vase to honour his 100th appearance as Musical Director at a Wales international game. 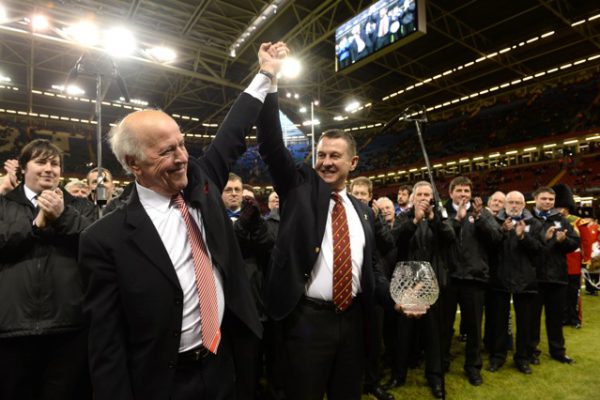 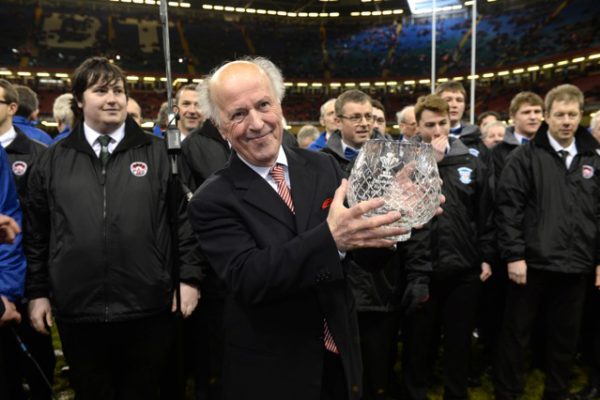 Having conducted the singing at six Rugby League Challenge Cup Finals, Haydn was appointed musical advisor for the Rugby League World Cup 2013. He conducted the music at the opening ceremony in Cardiff and the semi-finals at Wembley Stadium.

Junior Musician of the Year

Haydn was one of the adjudicators at the Treorchy Male Choir’s ‘Junior Musician of the Year’ Grand Final.  Haydn appeared as a guest conductor with the Treorchy Male Choir at their concerts in Brecon and Welshpool in December 2012, and was delighted to work with them on their Scottish tour, as well as in Chepstow Castle, Bromsgrove and Dunstable, Lyme Regis and Tidworth. 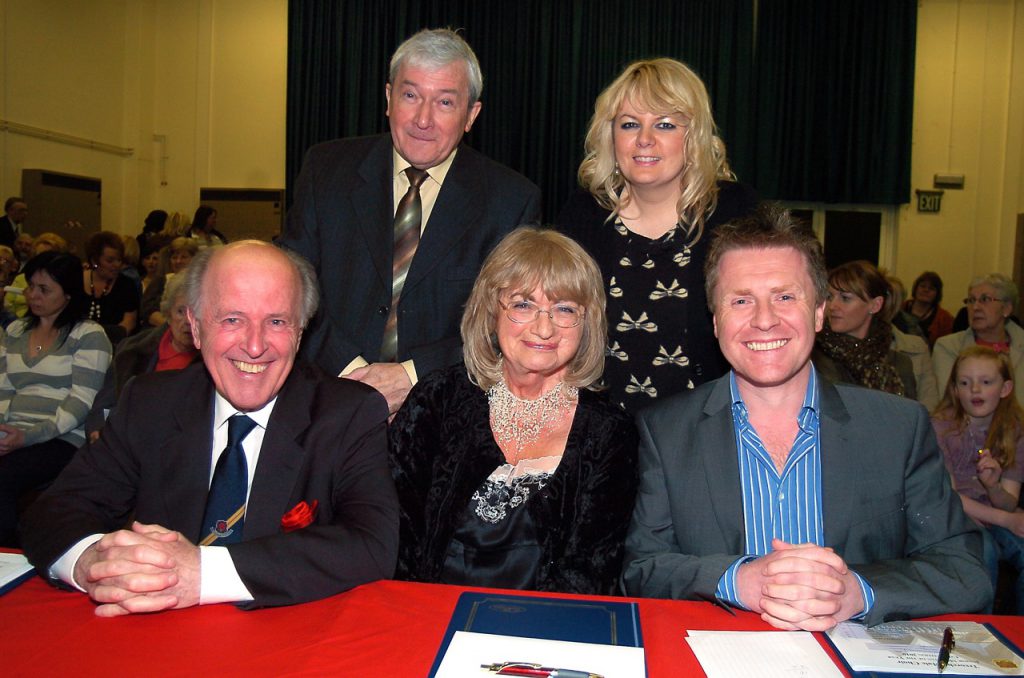 Haydn is seen here conducting the pre – match music for a Rugby League Challenge Cup Final. He led the Aveley and Newham Band with the Wessex Male Choir and the Huntingdon Male Voice Choir. Soprano Laura Wright joined choirs and band to sang the solo in ‘Abide With Me’ and the National Anthem. 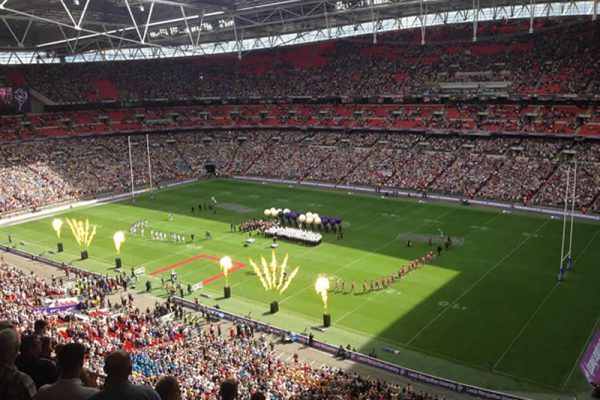 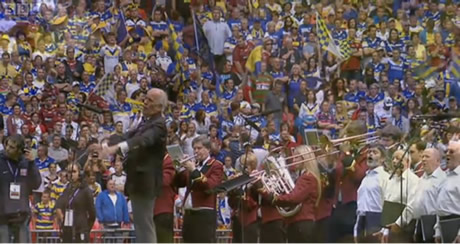 Before the 2011 Wales v Ireland match at the Millennium Stadium, Haydn was presented with a hand-carved wooden baton by WRU President Dennis Gethin OBE (right). On Dennis’ right are WRU Chairman David Pickering and WRU Chief Executive Roger Lewis, who also took part in the presentation. The award was in recognition of Haydn’s musical services to Welsh rugby over many years, and was accompanied by a commemorative Scroll. 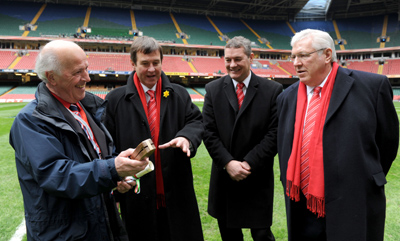 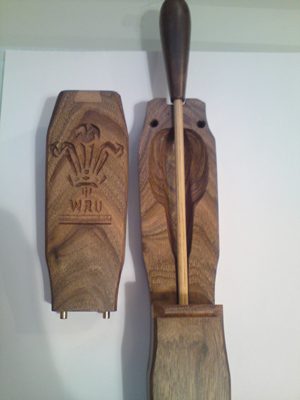 Haydn worked for almost two years with a newly-formed young male chorus, Eschoir, and conducted them at prestigious early engagements in the O2 Arena and the Millennium (Principality) Stadium, shown below. He is now an associate conductor, helping out as and when required. 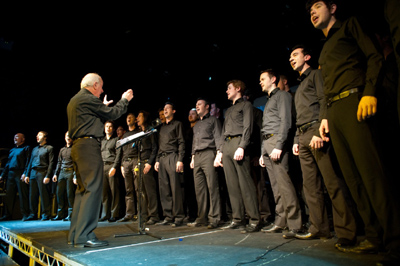 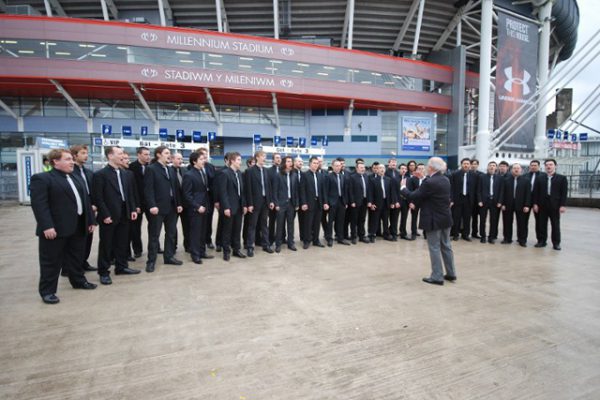 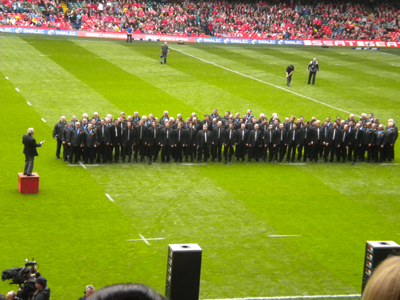 Haydn’s retirement from the London Welsh Male Voice Choir coincided with the retirement of the late Cliff Morgan as the Choir President. The occasion was marked by a Dinner in London. One of the choristers, Ian Edwards, wrote a tribute to the two men. This can be read at this link “Nobody Does It Better”

He was also guest conductor with the Huntingdon Male Choir at the Cornwall International Male Choir Festival and directed them in a concert later in the year.

Haydn conducted his 10th 1000 Voice Choir in June 2012, this time at the Millennium Stadium, rather than at the Royal Albert Hall, having assembled a choir of almost 2000 voices for Wales’ game against Australia in December 2011.

He was appointed chorus master and European Director at the ‘London Welsh Choir of the World held in London in July 2012 prior to the Olympic Games.

The photograph alongside shows Haydn directing a combined London Welsh chorus at the Commonwealth Carnival of Music at the Palace of Westminster as part of the Diamond Jubilee celebrations for Her Majesty The Queen. 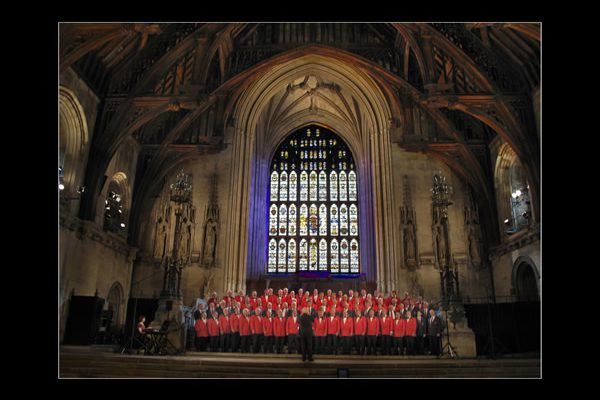 Haydn is an Honorary Member of Côr Meibion Gwalia and the Treorchy Male Choir and has been guest conductor with both of these choirs on a total of fifteen occasions in the past three years. He also conducted the Rushmoor Male Voice Choir at their recent Annual Concert in Aldershot, as well as making guest appearances with Côr Y Boro and Eschoir, and  appeared at the 2016 London Welsh Festival of Male Choirs at London’s Royal Albert Hall to conduct his own arrangement of ‘Working Man’.

He continues to work as Musical Director for the Welsh Rugby Union and is currently preparing for all eight of the home internationals in the 2018/2019 season, He has also been the British representative on an international panel of adjudicators at choral competitions in Krakow, Poland.